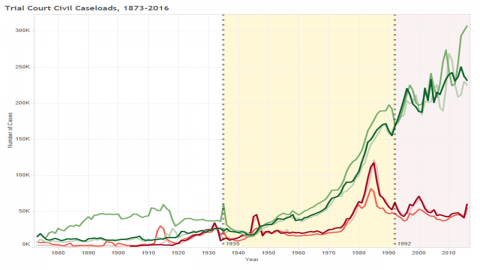 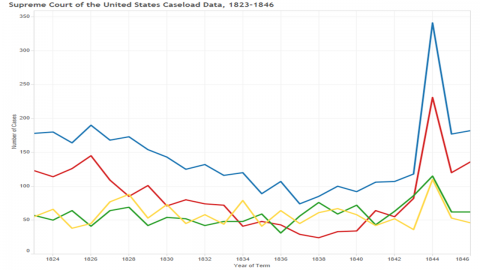 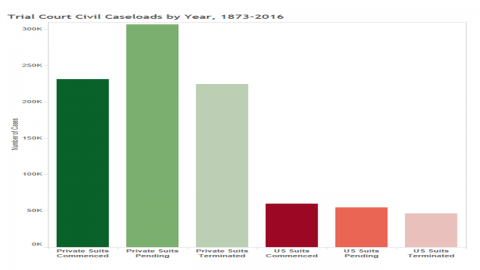 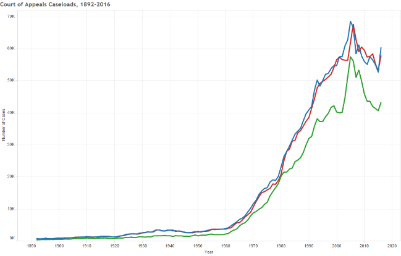 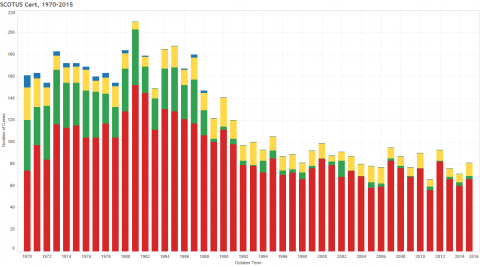 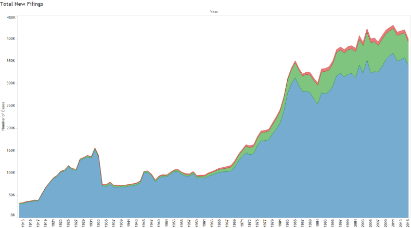 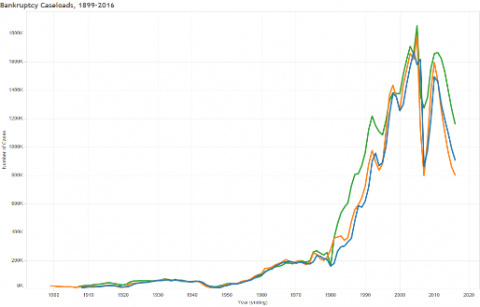 In 1870, the newly-created Department of Justice began to report information on the number of cases the federal trial courts handled each year. From 1870 to 1911, the Department recorded the number of cases before U.S. district, circuit, and territorial courts (although several districts did not report their data in the early years of this effort). From 1912, the Department’s reports focused on U.S. district courts as those courts became the federal system’s primary trial courts. Initially, the Department’s reports only contained information about suits to which the United States was a party. After a request from Congress that it gather statistical information on private civil suits, however, the Department began collecting that data from clerks of court in 1873.

The graphs below show civil court caseloads from 1873-2016. The first graph shows a view of these data over this entire timespan. You can focus on a narrower date range using the controls to the right of the graph. The second chart shows a snapshot of the same data for each year. You can select different years using the slider to the right of the chart. These graphs do not include bankruptcy filings in district courts, which are represented separately on the bankruptcy caseload page.

As with the earlier Supreme Court data, there were important changes in the method and timing of tabulations at various points that may present challenges in comparing data from different periods. In particular, the Department of Justice adopted new procedures for compiling statistics on January 1, 1935 (halfway through the statistical year 1935, which began on July 1, 1934) and published its data based on both as separate tables for the second half of 1934 and first half of 1935. Similarly, in 1992, the statistical year was changed to coincide with the fiscal year, ending on September 30, 1991. These graphs show the old statistical-year data for 1991 and the new fiscal-year data for 1992 and subsequent years.

Finally, it should be noted that some anomalies in these graphs may owe more to reporting difficulties within the judicial system than to historical events outside it. The rapid increase in pending public civil cases in 1913, for example, appears to have been caused by the reporting of thousands of previously unreported Oklahoma land cases. Similarly, although the number of districts reporting their data generally increased over the course of the late nineteenth century, some districts did not report their caseload data every year. [1]

As these graphs show, private suits have generally outnumbered those involving the federal government, though there have been important exceptions to this trend. Between the late 1910s and late 1940s, the number of new cases involving the United States government grew at a faster rate than private suits. Historians have attributed this trend to the influence of American intervention in the two world wars (1917-18; 1941-1945), the national alcohol prohibition (1920-1933), and a raft of new federal regulatory initiatives. By 1945, new public civil suits outnumbered new private civil suits nearly three-to-one. In later decades, however, private suits again became more prevalent than those involving the federal government. Since the mid-1980s, moreover, the proportion of cases to which the United States was a party has declined in both relative and absolute terms. In 1985, for example, there were 156,182 private civil suits and 117,488 public civil suits commenced in federal district court. In 2014, the equivalent figures were 250,367 and 46,749 respectively.

The three charts that follow show the federal criminal cases commenced, pending, and terminated for each year between 1874 and 2016.[2] The first two graphs are divided to reflect changes in criminal caseload reporting required by the Speedy Trial Act of 1974.[3] Perhaps the most striking trend observable in these data is the rapid rise of criminal cases from 1917 to 1933 and the rapid decline thereafter. Historians have pointed to several changes in the substantive federal law to explain this transformation. Criminal statutes enacted during World War I, including the Selective Service and Espionage Acts, both passed in 1917, expanded the range of federal offenses. The ratification of the Eighteenth Amendment and the subsequent passage of the Volstead Act of 1919, moreover, further swelled the federal criminal dockets with cases related to Prohibition.

The next chart offers a year-on-year comparison of the federal criminal and civil district court dockets. To the extent these data reflect the roles played by the federal circuit and district courts, they show that the relative weight of criminal and civil caseloads have shifted significantly over time. Because of the comparative nature of these data, this chart begins with the year 1904, when the Department of Justice began publishing information on the number of cases commenced, terminated, and pending for both civil and criminal matters.

[1] See the Caseload page for a full description of these omissions.

[2] Criminal caseload data for 1870-1873 are available on the Caseload page, but several districts did not report their data during those years. A smaller number of districts failed to report in subsequent years. See the Caseload page for a full description of these omissions. The Department of Justice revised the data on pending cases for statistical year 1903 and most subsequent years in the following year’s reports. The charts and graphs on this page use the revised data where available. The “miscellaneous” prosecutions statistics for 1907 were substantially revised in the 1908 report, which reduced the total number of pending cases from 16,441 to 8,852. As a consequence, the number of cases reported as pending in 1907 does not match the rest of the data from that year and previous years.

[3] The Act rejected the prior practice of counting superseding indictments and informations as new filings and required the reporting of minor offenses omitted from previous years’ reports. The Administrative Office of the United States Courts’ report indicates that data before and after 1976 “should be regarded as non-comparable.”