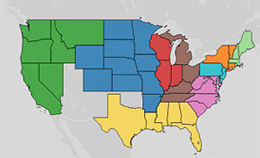 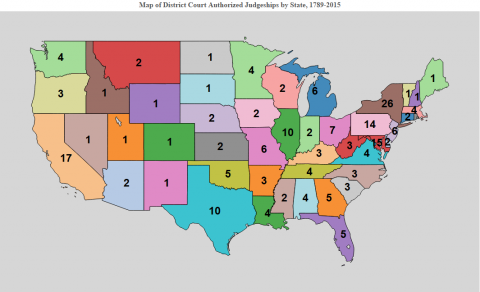 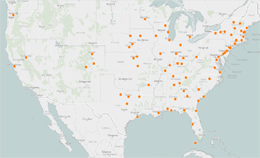 Since 1789, Congress has arranged the federal courts into circuits. The federal courts of the first several states were initially divided into Eastern, Middle, and Southern Circuits, with occasional additions to circuits to allow for the entry of new states. In 1801, however, Congress disbanded this structure in favor of six numerically-designated regional circuits. It created a seventh circuit in 1807, an eighth and ninth in 1837, and a tenth in 1863, though that circuit was abolished three years later (it was subsequently revived in 1929 when Congress bifurcated the Eight Circuit). In 1980, Congress divided the Fifth Circuit to create an Eleventh, and to date final, geographical circuit.

Besides the creation and abolition of circuits, Congress frequently reorganized the circuits between 1789 and 1982 to reflect the admission of new states, acquisition of new territories, and changes in population and workload. This has meant that courts seated in any given state may have been located in several different circuits over time. Indeed, only the Second Circuit, which encompasses Connecticut, New York, and Vermont, has covered the same geographic region since 1801.

Congress has generally divided circuits along state boundaries, though several circuits have included territories that eventually became states. The territories of Alaska and Hawaii, for example, were included in the Ninth Circuit beginning in 1900 and the Sixth Circuit briefly encompassed the District of Ohio, which included several future Midwest states.[1] The modern territory of Puerto Rico has been part of the First Circuit since 1915 and the U.S. Virgin Islands have been part of the Third Circuit since 1948. Guam and the Northern Mariana Islands have been included in the Ninth Circuit since 1951 and 1977 respectively. Not all states’ federal courts were incorporated into a circuit at all times. Florida, for example, attained statehood in 1845, but was not added to the Fifth Circuit until 1862. Similarly, California attained statehood in 1850, but was only organized into its own circuit in 1855 (it was subsequently incorporated into the Tenth Circuit in 1863 and the Ninth Circuit in 1866).

The interactive map below enables you to see the changing shape of geographical circuits over time. Areas left blank on the map were not allocated to any circuit in that year. The map employs present-day state boundaries but attempts to follow the geographical territory covered by circuits as closely as possible within these boundaries. Thus, for example, the region now occupied by West Virginia is included in circuits containing Virginia prior to West Virginia obtaining statehood in 1863. The map reflects Congressional statutes creating and changing judicial districts and thus does not show the secession of states during the U.S. Civil War or disputed land claims between states. The map also excludes the Panama Canal Zone, which was part of the Fifth Circuit from 1948 to 1982, as well as the Federal Circuit, which is jurisdictional, rather than geographical, in scope.

[1] In 1801, the Sixth Circuit included Kentucky and the District of Ohio. This district included two federal territories carved out of the former Northwest Territory: The Territory Northwest of the Ohio River and the Indiana Territory. Combined, this district included the land covered by the modern states of Ohio, Michigan, Illinois, Indiana and Wisconsin. The map reflects this by grouping the land now covered by these states in to the circuit. A small parcel of land in what is now Minnesota was also part of the Indiana Territory, but is not included in the Sixth Circuit for the year 1801 on this map. This district was abolished in 1802, when the Sixth Circuit came to encompass Georgia and South Carolina. A new District of Ohio was created in 1803 as Ohio gained statehood. It was added to the Seventh Circuit in 1807 and remained in operation until 1855, when Ohio was divided into Northern and Southern Districts.