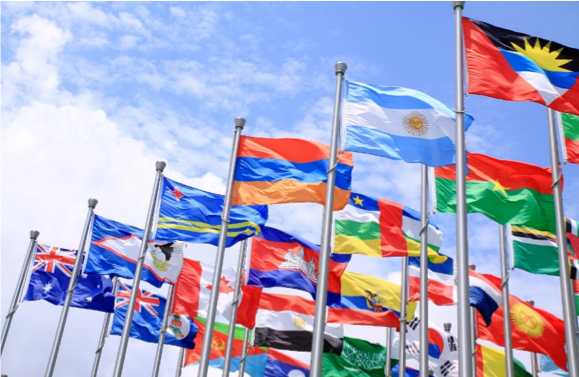 Soon after the Center was established in 1967, its reputation for innovation in the field of judicial branch research and education spread domestically and abroad. When judges and judiciary officials visited Washington, D.C., in the 1970s and 1980s, they often requested a meeting at the Center.

Visitors arrived with specific interests. For example, in 1970, five Italian judges met with Center staff to learn about the use of court technology. A scholar from Munich University Law School requested a meeting in 1971 to discuss “computers and the law.” In 1974, the Center hosted representatives from Japan’s Judicial Administrative Management Office for a program about court administration. In 1989, the Center hosted court officials from Australia interested in preserving historic courthouses, from South Africa interested in learning more about judicial governance, and from the German Democratic Republic interested in education in the courts. A delegation from the Russian Federated Republic of the Soviet Union, led by the minister of justice, visited the Center in 1991 for an overview of the U.S. legal system.

The 1990s ushered in a period of significant global transition with emerging democracies in Africa, South America, Central and Eastern Europe, and the post-Soviet states. The number of visitors to the Center increased, as did the scope of their requests. Programs for foreign visitors included discussions of judicial independence, constitution drafting, the role of a free press, and strategies for developing an accountable and professional judiciary. Some of these meetings were carried out in collaboration with the Administrative Office of the U.S. Courts.

With a modest staff and its primary mission focused on education and research for the U.S. courts, the Center was strained in its ability to keep up with these requests. In 1991, Director William Schwarzer asked the Center’s board to consider a statutory amendment to the Center’s implementing legislation that would provide a clear mandate to assist foreign judiciaries. The board approved this proposal.

On October 7, 1992, Senator Hugh Heflin of Alabama introduced a number of recommendations from the Federal Courts Study Committee, including legislation to allow “the Federal Judicial Center to work with other organizations to assist in the development of judicial systems in foreign countries.” In his recommendations, he observed,

With new democracies forming all over the world, it is essential that our judicial branch officers and employees be authorized to share their expertise in judicial administration and the basic tenets of freedom that this country holds dear. I anticipate that there will be many beneficial developments from the efforts of the Federal Judicial Center, the Judicial Conference, and the Administrative Office of the U.S. Courts in this regard. [1]

The Center’s legislation was amended,[2] and the Office of Interjudicial Affairs was created.[3]

Although most international programs were limited to informational briefings, the Center began to receive requests to host judges for longer programs and research visits. In 1992, the Center held a three-week seminar for judges from the newly independent states of the former Soviet Union, funded by the State Department. In 1995, at the request of the Institute for the Study of the Americas and the Inter-American Development Bank, the Center held a program for ninety-two judges and legal officials: Judicial Reform in the Western Hemisphere.

The Center became a resource for U.S. government agencies and other institutions working in the field of international rule of law. The Interjudicial Affairs Office identified judges and court personnel with relevant expertise for assessment projects, workshops, and international conferences. Center staff were asked to participate in these efforts, traveling abroad to assist with creating new judicial training centers or implementing judicial reform initiatives.

During this time, the U.S. judiciary increasingly engaged with foreign counterparts. Much of this work was facilitated by the U.S. Judicial Conference Committee on International Judicial Relations.[4] When federal judges sought to expand their knowledge of foreign judicial systems and international law, they reached out to the Center for assistance and materials.

In 2001, the International Judicial Relations (IJR) Office replaced Interjudicial Affairs.[5] Except for the salaries of IJR staff (the director and an assistant) and de minimis administrative costs, the Center spends no appropriated funds on international programs. Funding and logistics for foreign visitors and staff participation in programs abroad are supported by executive branch agencies (including the Departments of State, Justice, and Commerce) or international organizations and foreign governments.

Through the work of the IJR Office, the Center helps other nations build accountable judicial branch institutions, fostering the rule of law and facilitating economic development by improving court operations and the professional skills of judges and court administrators. The Center serves as a resource for the federal courts and shares the professional excellence and institutional innovations of the U.S. judiciary with the world.

“[W]hen you talk not only to visitors from foreign countries, but to members of State judiciary that are visiting us, they look at the Federal Judicial Center as really one of the crown jewels of the Federal system and that it is very efficient.”

―Associate Justice Anthony M. Kennedy, Hearings Before a Subcommittee of the Committee on Appropriations (Departments of Commerce, Justice, and State, the Judiciary, and Related Agencies Appropriations for 1996), House of Representatives, One Hundred Fourth Congress, First Session, March 8, 1995.

[3] The Interjudicial Affairs Office was responsible for both international programs and initiatives involving the U.S. state courts.

[5] Responsibility for state-federal programs was transferred to the Research Division.