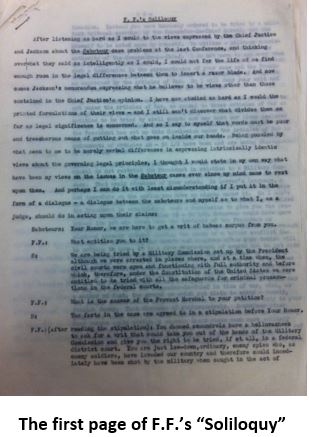 In 1942, Justice Felix Frankfurter wrote his Supreme Court colleagues one of the most extraordinary messages in American legal history. Despairing that conventional legal analysis had proven inadequate to organize the justices’ thoughts in a difficult case, he resorted to an imaginary dialogue that he titled (somewhat confusingly) “F.F.’s Soliloquy.” Justice Frankfurter’s fictional conversation imagined him remonstrating with one of the defendants in a case challenging the military trial of German operatives on American soil during World War II. Frankfurter aimed to shame his colleagues into setting aside their jurisprudential differences in the case.

This unusual tactic offers an insight into the increasingly antagonistic relationships between members of the Stone Court (1941–46). The “Soliloquy” is also a valuable historical document for those interested in the interaction between internal deliberations and external events in judicial decision making. To better understand the origin and importance of the “Soliloquy,” this spotlight provides a brief description of the case that gave rise to the document before analyzing its text in historical context.

To twenty-first-century eyes, the facts of Ex Parte Quirin (1942) seem more likely to have been taken from the pages of an adventure novel than the U.S. Reports. In June 1942, eight Nazi saboteurs—some American citizens and others not—secretly swam ashore from U-boats off the eastern seaboard in two groups. They planned to rendezvous in New York City and destroy strategic targets. The saboteurs came ashore wearing partial or whole German uniforms on the theory that this would render them prisoners of war in the event of capture. The operation might have succeeded had two of the men not opted to travel to Washington, D.C., where one of them reported his compatriots to American authorities in the mistaken belief that he would be welcomed as a hero.

President Franklin Roosevelt’s administration opted to try all eight saboteurs as unlawful enemy combatants in a military court. Roosevelt then issued a proclamation that both Americans and foreigners “charged with committing or attempting or preparing to commit sabotage, espionage, hostile or warlike acts, or violations of the law of war shall be subject … to the jurisdiction of military tribunals[.]” The proclamation also commanded that these individuals “shall not be privileged to seek any remedy … in the courts of the United States.” Before the military commission tried the men, Frankfurter privately told administration officials he supported trying the saboteurs outside of the civilian judicial system.

The military commission sentenced all eight men to death. The District Court of the U.S. for the District of Columbia denied their attempt to petition for writs of habeas corpus. The defendants claimed that they were lawful combatants entitled to the protections of international law and due process. However, relying on Roosevelt’s proclamation, the court held they had no right to challenge their military detention and trial. On appeal, the Supreme Court held a special set of hearings, including nine hours of oral arguments, on July 29and 30, 1942. The next day, the Court issued a per curium (a brief, unattributed opinion) stating that the prisoners were not entitled to be discharged from custody. Six of the prisoners were executed days later; Roosevelt commuted the sentences of the two men who broke with their co-conspirators.

The Supreme Court did not release its full opinion in the case until late October. While the Court had already announced its seemingly unanimous view that the military trials were valid, the justices could not settle on any legal justification for this result. Indeed, after the executions, some of the justices began to doubt whether the military tribunal had taken place in accordance with the Articles of War. The Articles permitted the military trial of unlawful combatants, but it was not clear this language applied to the saboteurs. Justice Owen Roberts urged his fellow justices to hold that Roosevelt did not have the power to deny the prisoners federal-court review. Justice Robert Jackson circulated a memorandum that could have served as a concurring opinion arguing that the Court ought not review military judgments. Frankfurter worried that a divided opinion in the case would delegitimize the government’s actions and sow discord among the Court’s members at a critical moment. The “Soliloquy” was his attempt to unify the Court. 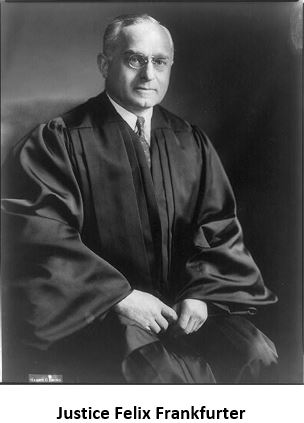 He began the document by maintaining that he was unable to discern any real differences between the justices’ positions. He claimed he “could not for the life of me find enough room in the legal differences between [Chief Justice Harlan Fiske Stone’s proposed opinion and Justice Jackson’s position] to insert a razor blade.” His hypothetical response to the saboteurs’ claims, he intimated, was a more appropriate approach than his colleagues’ legalistic nitpicking. Frankfurter claimed he would have told the saboteurs, “You damned scoundrels have a helluva cheek to ask for a writ that would take you out of the hands of the Military Commission …. You are just low-down, ordinary, enemy spies who, as enemy soldiers, have invaded our country and therefore could immediately have been shot by the military when caught in the act of invasion.” He continued his denunciation in a manner that stressed the need for unity over constitutional exegesis:

You’ve done enough mischief already without leaving the seeds of a bitter conflict involving the President, the courts and Congress after your bodies will be rotting in lime. It is a wise requirement of courts not to get into needless rows with the other branches of the government by talking about things that need not be talked about if a case can be disposed of with intellectual self-respect on grounds that do not raise such rows. I therefore do not propose to be seduced into inquiring what powers the President has or has not got, what limits the Congress may or may not put upon the Commander-in-Chief in time of war, when, as a matter of fact, the ground on which you claim to stand—namely, the proper construction of these Articles of War—exists only in your foolish fancy. That disposes of you scoundrels.

Frankfurter concluded by implicitly questioning the other justices’ patriotism, claiming that soldiers in the field would ask them,

What in hell do you fellows think you are doing? Haven’t we got enough of a job trying to lick the Japs and Nazis without having you fellows on the Supreme Court dissipate the thoughts and feelings and energies of the folks at home by stirring up a nice row as to who has what power …? Haven’t you got any more sense than to get people by the ear on one of the favorite American pastimes—abstract constitutional discussions.… Just relax and don’t be too engrossed in your own interest in verbalistic conflicts because the inroads on energy and national unity that such conflict inevitably produce, is a pastime we had better postpone until peacetime.

This was an unusually frank appeal to patriotism and emotion over the measured analysis one typically associates with the judicial enterprise. Frankfurter, one of the leading law professors in America before his appointment to the Court in 1939, was nobody’s anti-intellectual. He did, however, have a strong patriotic streak that played a role in some of his wartime opinions. A Jewish immigrant from Austria, Frankfurter had an emphatic response to both Nazi aggression in Europe and wartime dissension in his adopted homeland. Two years before Quirin, Frankfurter had authored an opinion upholding laws requiring public school children to salute the flag. Three justices who signed off on that opinion later signaled that they had strong misgivings about the outcome of the case (it was overturned in 1943) but were won over by Frankfurter’s passion and patriotism. These may have been factors again as the Court ultimately issued a unanimous opinion in Quirin after Frankfurter circulated the “Soliloquy.”

The opinion, written by Chief Justice Stone, held that belligerents “associated with the armed forces of the enemy” were not entitled to a civilian trial. Their trial by military commission comported with the Articles of Law. Whether the entire Court would have signed onto this decision in the absence of Frankfurter’s extraordinary “Soliloquy” is a matter of conjecture. It is nonetheless clear that this unusual document is redolent of the fraught historical moment in which the justices made this momentous decision.

Read an essay about judicial review of executive orders.