A Brief History of Circuit Riding

In 1851, Supreme Court Justice Peter Daniel found himself on a canal boat traveling from Washington, D.C., to Pittsburgh, Pennsylvania. The justice was “riding circuit”: traveling to Arkansas and Mississippi, then making up the Ninth Circuit, to preside over cases in the U.S. circuit courts. Justice Daniel did not particularly enjoy his company on the boat, describing his fellow passengers as “some of the most vulgar and filthy in the world, women more disgusting if possible by their want of cleanliness than the men.” The washing facilities were not to his liking either, consisting of two dirty basins and a single towel meant to be shared by all of the men. During the two-day journey, Daniel neither slept nor changed his clothes, and limited his ablutions to wiping his face with a handkerchief. 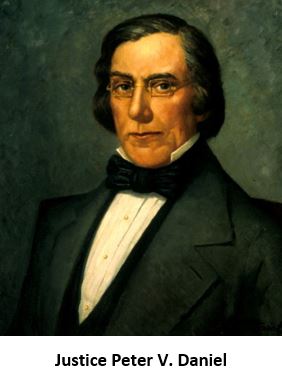 Daniel’s experience, while certainly unenviable, was mild compared to the horrors endured by some of his predecessors while riding circuit, especially in the Court’s earliest years. In 1792, Justice James Iredell was riding in a horse-drawn chair known as a gig when his horse tried to run off, resulting in the justice crashing into a tree and being thrown to the ground, whereupon one of the wheels ran over his leg. Justice Samuel Chase fell through the ice and nearly drowned while trying to cross the frozen Susquehanna River on foot in 1800. Other justices wrote of journeys covering thousands of miles, in all kinds of bad weather, over rough roads and raging rivers. They routinely endured illness and fatigue on their travels and, once at their destinations, were housed in meager public accommodations at their own expense. Justice William Cushing once had to stay in a room with twelve other men, while others sometimes found themselves sharing beds with strangers.

Although travel conditions improved throughout the nineteenth century, circuit riding remained arduous. Before the opening of the transcontinental railroad in 1869, Justice Stephen Field had to take a steamship to Panama, travel by rail across the isthmus, and then get on another ship to reach the courts of his circuit on the west coast. Even continuous trips on the railroad could be hazardous. On one such journey, Field was attacked in a station dining room by a former state-court colleague turned bitter rival whose wife he had ruled against while sitting on a U.S. circuit court in California. A U.S. marshal protecting Field shot and killed the man. Field was arrested as an accomplice to murder but the charges were quickly dropped. (The marshal was eventually exonerated as well, on the basis that he was acting in the course of his professional duties.) 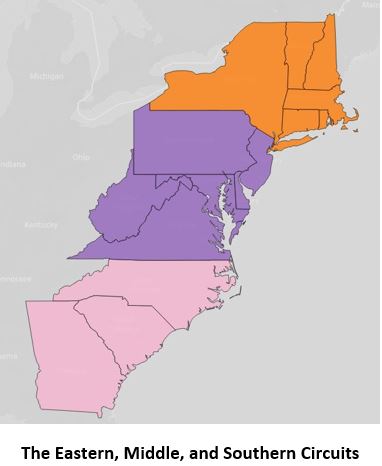 Circuit riding was a function of the structure of the federal courts for most of the nineteenth century. When Congress established the lower federal courts in the Judiciary Act of 1789, it provided no separate judgeships for the U.S. circuit courts, which were the main federal trial courts. Instead, the circuit court in each judicial district was held by the judge of the U.S. district court and the two justices of the Supreme Court assigned to that circuit (with any two of these jurists constituting a quorum). The justices allotted themselves to the Eastern, Middle, and Southern Circuits from 1790 until Congress first introduced a numbered circuit system in 1801. James Iredell was the last of the original six justices to be appointed and therefore was not present when the initial circuit allotments were made. Irked at being assigned to the Southern Circuit, which was the largest and the most difficult to traverse, he petitioned his fellow justices to institute a rotation system for circuit allotments. When they declined, he petitioned Congress, which provided in 1792 that a justice could not be reassigned to the same circuit without consent until every other justice had served there. The provision remained in effect until the Judiciary Act of 1801 superseded the existing circuit system.

Circuit riding had its origins in England, where it had been practiced for centuries with the aim of maintaining some uniformity of legal rules throughout the country. Congress imported the tradition, which already existed in some state-court systems, for several additional reasons. For one, not having dedicated circuit judges saved money by minimizing the number of judicial salaries to be paid. (Riding circuit was considered part of a justice’s regular duties, so they were not compensated above and beyond their usual pay.) Perhaps more importantly, legislators were wary of a Supreme Court that would otherwise be cloistered in the nation’s capital, its members having no interaction with citizens in other parts of the country. Circuit riding would expose the justices to conditions throughout the nation and permit them to act as representatives of the new federal government, helping to reinforce its legitimacy. Justices on circuit acted as “republican schoolmasters”—as one scholar put it—using the lengthy grand jury charges they gave at the beginning of each circuit court session to give instructions on the law but also to opine on the issues of the day, explain the principles of republican government, and instill a sense of civic virtue in the populace. (While justices in the early republic were more closely associated with political parties than they were in later periods, they could run into trouble for making overtly political remarks. Federalist justice Samuel Chase was impeached in 1804 in part because of a grand jury charge in which he criticized Republicans for repealing the Judiciary Act of 1801.) 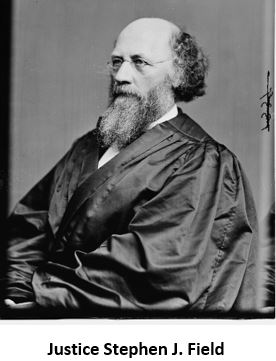 The justices, particularly in the early republic, were understandably unhappy about having to perform circuit-riding duties. Some raised doubts about the constitutionality of giving the justices on circuit original jurisdiction of cases over which the Supreme Court lacked original jurisdiction and of having justices review cases on appeal in which they had ruled as a trial judge. The Court declared the practice constitutional in Stuart v. Laird (1803), however, and in any event the objections the justices presented to the president and Congress were practical rather than legal. In 1792, for example, they complained to George Washington that their age and health, combined with the vast territory they had to cover, made their circuit duties “too burdensome.” In response, Congress reduced the number of justices designated to hold circuit court from two to one in 1793. Justices raised similar objections with subsequent presidents over the years, all to no avail.

Traditionally, justices were assigned to circuits in the parts of the country where they resided, although only once, when creating the Seventh Circuit in 1807, did Congress legislatively mandate that a new justice reside in a particular circuit. The unofficial yet closely followed policy was predicated in part on the notion that justices would be more familiar with the law of their own and neighboring states and therefore better able to decide diversity of citizenship cases, which often required them to apply state law. Additionally, justices’ knowledge of the local bar would assist them in deciding which attorneys to admit to practice in federal court. The practice of filling a Supreme Court vacancy with a new justice residing in the same circuit as his predecessor had significant implications for the Court’s membership. Prior to the Civil War, for example, five of the nine circuits consisted entirely of slave states, allowing southerners to maintain a majority on the Court. A circuit reorganization in 1862 reduced this number to three and allowed President Abraham Lincoln to appoint two new justices from the North to fill vacancies left by southerners.

Circuit riding was abolished from 1801 to 1802 when the outgoing Federalist majority in Congress created new circuit courts with their own judgeships, to be filled by President John Adams’ “midnight judges.” After the 1801 act was repealed in 1802, circuit riding resumed, although district judges were permitted to hold circuit courts in the absence of the circuit justice. No significant change occurred until 1869, when Congress reduced circuit riding burdens by once again creating judgeships dedicated to the circuit courts. The new circuit-riding judges were supposed to hold court at least once a year in each location within their assigned circuit (although this did not always happen in practice) and were permitted to hold court with or without a Supreme Court justice present. District judges were still authorized to hold circuit courts as well. The Evarts Act of 1891 authorized, but did not require, justices of the Supreme Court to sit on the newly created U.S. circuit courts of appeals, and most justices ceased riding circuit upon its enactment. Circuit riding was not abolished completely until Congress eliminated the U.S. circuit courts in 1911, transferring their jurisdiction to the U.S. district courts. In the time since, the Chief Justice has continued to allot the justices to the circuits as required by law. Although they remain authorized to sit on the U.S. courts of appeals, their circuit duties are typically limited to ruling on petitions for emergency relief, such as a stay of execution. Retired justices are authorized to sit on the appellate courts as well, and many have done so.

Given that it has been well over a century since the practice of circuit riding ceased, many are unaware, and would be surprised to learn, that the justices of the Supreme Court once served as trial judges in courts across the nation. Those justices played a crucial but largely forgotten role in the development of a uniform national legal system. The study of circuit riding helps to highlight the importance of the lower federal courts in American legal history.

Related FJC Resources:
Learn more about the structure and history of the U.S. circuit courts and circuit allotments, and view an interactive map showing how the federal judicial circuits changed over time.