Could Congress grant the Bank of the United States the right to sue and be sued in the federal courts?

As part of Alexander Hamilton’s plan to turn the United States into a major commercial and manufacturing power, Congress established the Bank of the United States in 1790. The Bank, although a private corporation, served as the financial agent of the federal government, holding public funds, issuing currency, and making loans. Thomas Jefferson and others believed the Bank to be illegitimate because its creation did not fall within the enumerated powers granted to Congress by the Constitution. Many in the South, who shared Jefferson’s vision of America as a nation of farmers, opposed an institution they believed was intended to enrich private commercial interests in the Northeast. When its charter expired in 1811 and was not renewed, the Bank ceased operations.

President James Madison proposed a new national bank in 1815 as part of a larger plan for economic development, and the Second Bank of the United States was founded in 1816 with a twenty-year charter. The new bank caused controversy as well; like its predecessor, it was seen by many as a tool of the elite. When the United States experienced a brief financial depression known as the Panic of 1819, many blamed the Second Bank, accusing it of engaging in excessive speculation related to the nation’s westward expansion. The Bank printed large amounts of paper money to issue loans for the purchase of land. When land prices fell, the Bank was forced to demand repayment of those loans, sending many into bankruptcy.

The Second Bank’s unpopularity caused several states to pass laws imposing taxes upon it. In McCulloch v. Maryland (1819), the Supreme Court held these laws to be invalid, declaring that a state lacked the power to tax an entity of the federal government. “The power to tax,” wrote Chief Justice John Marshall, “involves the power to destroy,” and states could not be permitted to exercise such a power over the Bank. The Osborn case arose from an attempt by the state of Ohio to collect tax payments from the Second Bank.

Article III of the Constitution extended the judicial power of the United States to all cases “arising under” the Constitution, federal statutes, and treaties. Although the Constitution set the outer limits of federal jurisdiction, Congress was responsible for defining the courts’ jurisdiction within those parameters. In doing so, legislators had to contend with competing principles: that the federal government should not intrude excessively upon the states, and that the nation’s laws ought to be enforceable in the national courts. Prior to 1875 (except under the short-lived Judiciary Act of 1801), Congress chose not to endow the federal courts with general original jurisdiction in civil cases arising under federal law, also known as general federal-question jurisdiction. Most federal-law cases were therefore heard in state courts, while the federal courts were limited to hearing cases arising under statutes in which Congress had made a specific grant of jurisdiction. Congress made such a jurisdictional grant in the Patent Act of 1793, for example, which gave the U.S. circuit courts exclusive jurisdiction over patent infringement cases.

In the 1809 case of Bank of the United States v. Deveaux, the Supreme Court was called upon to decide whether the federal statute incorporating the Bank of the United States constituted a grant of jurisdiction to the federal courts over suits brought by the Bank. The act granted the Bank the right to “sue and be sued . . . in courts of record, or any other place whatsoever.” The Bank claimed that this language entitled it to sue in the U.S. Circuit Court for the District of Georgia to recover money the defendants had seized to satisfy a state tax bill the Bank had refused to pay. In his opinion for the Court, Chief Justice Marshall explained that the standard language of the incorporating act was intended to allow the corporation to appear in any court that would have jurisdiction over it and not “to enlarge the jurisdiction of any particular court.” As a result, the act was not sufficient to permit the Bank to sue in federal court. Fifteen years later, in Osborn, the Court was presented with the similar question of whether a suit brought by the Second Bank of the United States was within the jurisdiction of the federal courts.

In February 1819, the state of Ohio passed a statute declaring that the Second Bank of the United States was operating within the state contrary to state law; unless the Bank suspended operations before September 15, the statute provided, the state would impose upon it a tax of $50,000 for each branch within Ohio. The Bank applied to the U.S. Circuit Court for the District of Ohio for an injunction prohibiting the state auditor, Ralph Osborn, from carrying out the terms of the act. The court granted the injunction, which was then served on Osborn. Nevertheless, Osborn’s agent, John Harper, proceeded to the Bank’s branch at Chillicothe and collected the tax by seizing $100,000. The Bank brought suit in the U.S. circuit court, which ordered Osborn and Harper to repay the Bank with interest. The defendants then appealed to the Supreme Court of the United States. Among the arguments they made in seeking to have the lower court’s decree nullified was that the Bank had not been authorized to bring suit in federal court.

The Supreme Court ruled that the circuit court had jurisdiction over the Bank’s lawsuit and upheld its decision in favor of the Bank. Chief Justice John Marshall—a proponent of a strong national government who had previously ruled in favor of the Bank’s constitutionality in McCulloch v. Maryland—authored the Court’s opinion. He began by distinguishing the case at hand from Deveaux. Whereas the original Bank’s incorporating act, at issue in Deveaux, had contained only a general reference to “courts of record,” Congress had declared in the Second Bank’s charter that the Bank would be “able and capable in law . . . to sue and be sued . . . in any Circuit Court of the United States.” The language of the charter was clearly sufficient to confer jurisdiction on the federal courts, Marshall wrote, unless such a grant of jurisdiction was unconstitutional.

The constitutionality of the charter’s grant of jurisdiction depended on whether Osborn was a case “arising under” federal law and therefore within the ambit of the Article III definition of the judicial power of the United States. Interpreting the meaning of “arising under” for the first time, the Court construed the term broadly. If, Marshall wrote, “the title or right set up by the party, may be defeated by one construction of the constitution or law of the United States, and sustained by the opposite construction,” any other questions involved in the case were “incidental” for purposes of federal jurisdiction. In that event, he continued, a federal question “forms an ingredient of the original cause,” and “it is in the power of Congress to give the Circuit Courts jurisdiction of that cause, although other questions of fact or of law may be involved in it.”

With those principles in mind, Marshall considered the Bank’s charter. Not only did the law create the Bank, but it endowed the Bank with all of its rights and powers. The Bank could not do anything, such as bring a lawsuit, or assert any right, such as the right to recover property, unless authorized to do so by its charter. The charter necessarily formed an ingredient of any case involving the Bank, and any such case was therefore one “arising under” federal law.

Having found that the federal court possessed jurisdiction over the case, Marshall’s opinion proceeded to explain the Court’s ruling on the merits in favor of the Bank. Among several issues presented was whether the suit was barred by the Eleventh Amendment grant of sovereign immunity to the states. Asserting that the Eleventh Amendment did not apply unless the state was the party named in the record, Marshall held that a state official could be sued for an improper act. Marshall’s opinion also held the Ohio state law imposing a tax on the Bank to be unconstitutional, reaffirming the Court’s recent ruling in McCulloch. 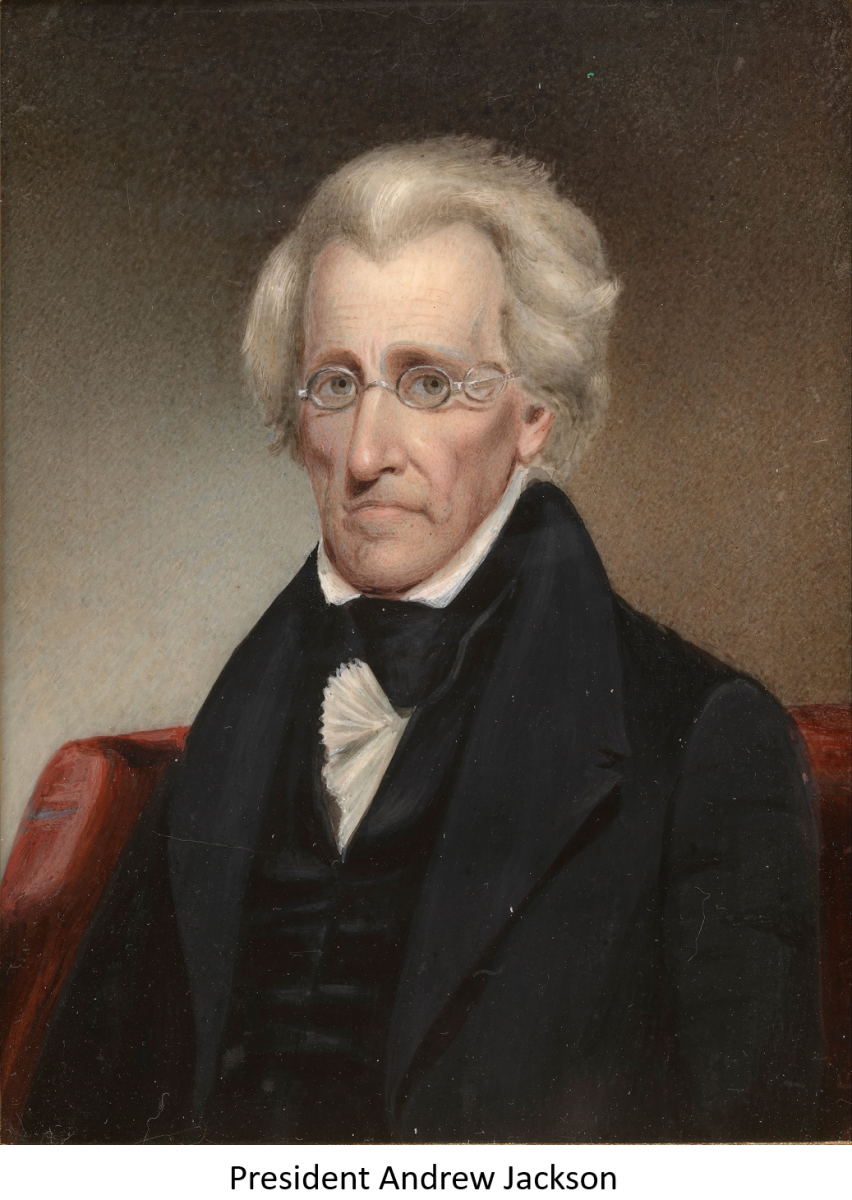 Andrew Jackson, elected president in 1828, was a fierce opponent of the Second Bank of the United States. In particular, Jackson opposed what he saw as the Bank’s excessive printing of paper money, which led to inflation and caused the value of workers’ wages to fall. Jackson believed that the country should return to “hard” money (i.e., gold and silver) as its only currency.

In 1832, with the Bank’s charter due to expire in four years, its president, Nicolas Biddle, lobbied Congress for a law extending the charter for an additional twenty years. Congress passed the law, but in one of the most controversial actions of his presidency, Jackson vetoed it. Echoing earlier criticisms of the Bank as a tool of the wealthy and powerful, Jackson expressed concern for “the humble members of society.” When Jackson was reelected in 1832, the Bank’s demise was certain.

The legacy of the Osborn case was slightly more complicated. Half a century after the case, Congress expanded federal jurisdiction dramatically when it enacted the Jurisdiction and Removal Act of 1875. The Act gave the federal courts jurisdiction over all cases arising under the Constitution and federal law as long as the amount in controversy was at least $500. The creation of general federal-question jurisdiction meant that Osborn would apply to a much wider range of cases and would no longer be limited to those arising under laws in which Congress had specifically provided for a federal right of action.

Over the years, however, judges and scholars disagreed as to how broadly to read Osborn. In his Osborn dissent, Justice William Johnson claimed that the ruling would create federal jurisdiction over a case “merely on the ground that a question might possibly be raised in it, involving the constitution, or constitutionality of a law, of the United States.” Justice Felix Frankfurter agreed with Johnson, noting in a 1957 dissent that Osborn could be construed as permitting federal jurisdiction “on the remote possibility of presentation of a federal question.” Others have argued, however, that Osborn was meant to provide for “arising under” jurisdiction only in cases where a federal law was actually determinative of the parties’ rights.

The Supreme Court has not attempted to define the precise boundaries of the Osborn holding or “arising under” jurisdiction. In Verlinden B.V. v. Central Bank of Nigeria (1983), the Court explicitly declined to resolve the issue, finding that a federal question had clearly been presented. In both Verlinden and Mesa v. California (1989), however, the Court noted that purely jurisdictional statutes—that is, statutes that did nothing other than attempt to confer federal jurisdiction over certain types of cases—were not themselves sufficient grounds for “arising under” jurisdiction.