In the late 1960s and 1970s, several senior government officials were forced to leave office amid allegations of corruption. The most infamous of these scandals, the Watergate affair, ultimately led President Richard Nixon to resign as the House of Representatives prepared articles of impeachment against him. In the aftermath of these scandals, Congress passed a number of laws designed to prevent and punish unethical and illegal conduct by public servants. One of these laws, the Ethics in Government Act of 1978 (“EGA”), provided a special process for the investigation of high-ranking officials.

The Act empowered a special division of the U.S. Court of Appeals for the District of Columbia Circuit (“D.C. Circuit”) to appoint an independent counsel to investigate officials. The special division was presided over by three judges serving on a part-time basis for two-year terms. One of these judges had to be from the D.C. Circuit and no more than one judge could be from any single court. The special division could not act on its own initiative; it could only appoint counsel if the Attorney General of the United States determined there was sufficient evidence to warrant an investigation.

Unlike other federal law enforcement officers, independent counsel were not subject to removal at the order of the President. Instead, the attorney general could remove independent counsel only if there was “good cause” (such as evidence the counsel had acted unethically) or if the counsel had become mentally or physically unable to perform the job. This system was designed to ensure the independence of investigators probing senior officials. Congress was concerned, for example, that an unscrupulous President or cabinet member might use his or her power to interfere with an investigation.

Both before and after its creation, critics charged that the independent counsel system was unconstitutional. Early criticisms often focused on separation-of-powers concerns raised by the use of federal judges to appoint investigators. They argued that this process exceeded the courts’ powers under Article III of the Constitution and interfered with the President’s authority to hire and fire executive officers under Article II. The EGA’s defenders noted that Article II, Section 2’s Appointments Clause permitted Congress to give courts the power to appoint “inferior Officers[.]” This position, however, raised the question whether independent counsel should be classed as an “inferior” or “principal” officers. “Principal” officers, such as ambassadors and cabinet members, must be appointed by the President “by and with the Advice and Consent of the Senate[.]” Judges cannot appoint principal officers.

Prior to the EGA’s passage, both the Department of Justice and President Jimmy Carter expressed approval for the EGA’s independent counsel provisions. Despite renewals and minor amendments to the scheme in 1982 and 1987, however, President Ronald Reagan’s administration (1981–1989) expressed growing concern that the independent counsel system could be abused. These criticisms intensified during the Iran-Contra Affair in Reagan’s second term of office. The investigation of that scandal ultimately led to charges against several officials who had participated in dubious weapons sales to free hostages and fund a foreign militia. Even so, many officials claimed the independent counsel was unfairly targeting them for investigation. The Reagan administration took the unusual step of refusing to defend the constitutionality of the independent counsel system in the courts during the Morrison litigation, which took place against the backdrop of the Iran-Contra controversy.

Morrison v. Olson grew out of a separate dispute between Congress and the Reagan administration. On the advice of Department of Justice lawyers including Theodore “Ted” Olson, President Reagan ordered the head of the Environmental Protection Agency not to turn over documents to a congressional committee. The House Judiciary Committee subsequently launched an investigation into the administration’s refusal to produce the documents. The committee issued a report that suggested Olson may have provided false testimony during this investigation. It sent the report to Attorney General Edwin Meese III, requesting that he start independent counsel investigations into the conduct of Olson and two other individuals. The Attorney General notified the special division that there were grounds to investigate Olson’s conduct. The special division appointed attorney James McKay as independent counsel. When McKay later resigned, the special division replaced him with Alexia Morrison.

Morrison convened a grand jury. Grand juries hear evidence to determine whether criminal charges should be brought. She then subpoenaed Olson, among others, to appear and testify before the jury. Olson then filed a motion with the U.S. District Court for the District of Columbia challenging the subpoena on the grounds that the special counsel system violated the Constitution. The Court ruled against Olson and subsequently held him in contempt of court for refusing to testify. Olson appealed to the D.C. Circuit, which held the EGA’s independent counsel provisions unconstitutional. Morrison then appealed to the Supreme Court of the United States, where she argued the case herself.

Through his attorneys, Olson claimed that the independent counsel system violated the Constitution on several grounds. He argued that Congress could not give the judges of the special division the power to appoint Morrison because she was a principal officer and thus had to be appointed by the President and approved by the Senate. Even if she was an inferior officer, he argued it was improper for Congress to give a body in the judicial branch (the special division) the power to appoint a member of the executive branch (the independent counsel). He also claimed that the special division violated Article III because the role of the courts is to decide cases, rather than to investigate crimes before charges are brought (traditionally an executive role). Finally, he argued the EGA violated the principle of separation of powers by interfering with the President’s powers to enforce the law and hire and fire executive officials. 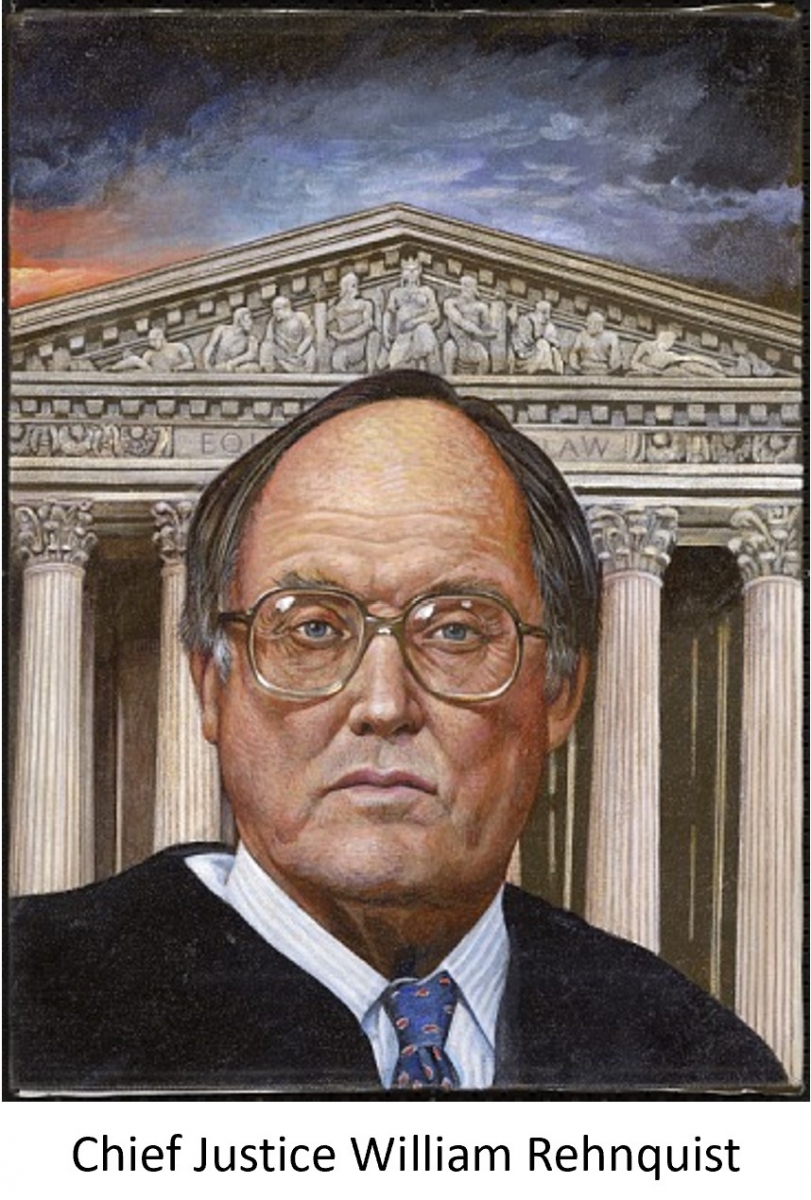 The Supreme Court upheld the EGA’s constitutionality by a 7–1 margin (recently appointed Justice Anthony Kennedy did not participate in the case). In an opinion by Chief Justice William Rehnquist, the Court ruled that Congress could empower judges to appoint independent counsel. Although the Constitution does not define the difference between principal and inferior officers, Rehnquist reasoned that Morrison was an inferior officer because she was subject to removal by the attorney general, she could only perform limited duties, and her jurisdiction was restricted to the investigation of matters related to Olson’s conduct. The Court also held that Congress could give judges the power to appoint executive officers where their roles were not “incongruous” (out of place) with the normal work of the courts. Morrison’s work as an investigator and lawyer met this standard.

Finally, the Court held that the independent counsel system did not violate the separation of powers by unduly interfering with the President’s ability to carry out the laws or remove executive officers. The Chief Justice noted that Congress was not trying to enhance its own powers through the EGA and, since the Appointments Clause authorizes Congress to allow courts to appoint inferior officers, this was not a case of judges assuming executive powers, either. The executive branch also retained some control over investigations, since the attorney general, who answers to the President, still had a limited ability to remove the independent counsel.

Justice Antonin Scalia wrote a lengthy dissenting opinion that emphasized the importance of separation of powers and the President’s authority over the executive branch. Scalia advanced what is sometimes called the “unitary executive theory,” the idea that the Constitution gives all federal executive power to the President and that neither Congress nor the courts can restrict this power as long as it does not violate some other part of the Constitution. He argued the Court’s alternative approach amounted to an arbitrary judgment call that the independent counsel system did not interfere “too much” with the powers the Constitution had given to the President alone. Rejecting the Court’s holding that Morrison was an inferior officer, Scalia argued that Congress did not have the power to allow judges to appoint her, nor the authority to restrict the President from firing her at will. He concluded with a warning that, because independent counsel were not accountable, their powers could easily be abused.

Morrison ultimately concluded that while Olson’s testimony to Congress was “misleading,” he had not committed perjury or any other crime. Olson continued a successful career in law and politics, winning the landmark case Bush v. Gore (2000), which decided the contested 2000 presidential election, and serving as Solicitor General of the United States from 2001 to 2004.

The independent counsel system continued to generate controversy after Morrison v. Olson. Independent Counsel Kenneth Starr’s investigation into President William and First Lady Hillary Clinton’s Arkansas real estate dealings lasted several years and ultimately expanded to include revelations about the President’s marital infidelity and allegations that he had lied under oath. Clinton was impeached by the House of Representatives, but acquitted by the Senate. The lengthy and costly investigation ultimately led members of both major political parties to turn against the use of independent counsel, and Congress declined to renew the system in 1999. Since that time, the Department of Justice has employed outside counsel, without the use of the special division or the “good cause” protections of EGA, to investigate allegations against senior officials.