Could federal courts invalidate laws that violate the Constitution?

Marbury v. Madison (1803) was the first case in which the Supreme Court of the United States invalidated a law passed by Congress. Chief Justice John Marshall’s opinion for the Court articulated and defended the theory of judicial review, which holds that courts have the power to strike down legislation that violates the Constitution. Though judges rarely used this power before the U.S. Civil War (1861–65), it increasingly framed an important element of the judiciary’s role in interpreting the Constitution. In part because of this, and in part because the facts of the case implicated a political struggle between the nation’s leading political figures, many scholars identify Marbury as one of Supreme Court’s most important decisions.

Historians debate the degree to which Marshall’s Marbury decision broke new ground. While the Constitution anticipated that the courts might hear cases “arising under” its provisions, it did not explicitly mention judicial review. The framers had considered plans for a “counsel of revision,” comprised of the President and federal judges, which would rule on constitutional issues, but ultimately rejected the idea. There were also relatively few historical precedents for judges striking down laws. The British Privy Council had invalidated some colonial legislation, but this procedure was unpopular with many Americans. Moreover, although a 1610 case had suggested that English courts might strike down laws that were “against common right and reason[,]” there was widespread consensus that English courts could not, in fact, invalidate acts of Parliament by the time the colonies declared their independence in 1776. England, however, did not have a written constitution and it was unclear whether the new U.S. Constitution, which created an independent national judiciary, granted American judges new powers.

During its ratification, some prominent figures argued that the Constitution implicitly required courts to strike down unconstitutional legislation. In Federalist no. 78, for example, Alexander Hamilton asserted that “[n]o legislative act . . . contrary to the constitution can be valid” and defended “the right of the courts to pronounce legislative acts void[.]” In 1788, future Chief Justice Oliver Ellsworth assured delegates at Connecticut’s ratifying convention (a body formed to debate the adoption of the Constitution) that “upright, independent judges” would guard the Constitution by striking down laws violating its protections. Marshall made similar statements to the Virginia convention. Some critics of the new Constitution also suggested that judges would invalidate state and federal legislation, though they saw this as a flaw in the document’s design. The Anti-Federalist “Brutus,” for example, referred to judicial review as an “uncontroulable power[.]” In the years following ratification, a few state courts struck down statutes on constitutional grounds; scholars debate how much weight these precedents carried.

In the late 1790s and early 1800s, American political life was dominated by the animosity between Federalists, led by John Adams, and Democratic-Republicans, led by Thomas Jefferson. The Democratic-Republicans defeated the incumbent Federalists in the congressional and presidential elections of November 1800, but the “lame-duck” Federalists retained control until the following March. In that time, Congress created several new judicial positions, to which the outgoing President Adams attempted to appoint Federalist allies. Many Federalists saw these appointments as a way to influence the government while they were out of political power. As a result, the appointment of these so-called “midnight judges” proved controversial.

When Ellsworth resigned for health reasons shortly after the election, Adams also gained the opportunity to fill the vacant Chief Justice position. John Jay (who had previously served as Chief Justice, but resigned to run for Governor of New York in 1795) turned the position down. Adams then nominated Marshall, his Secretary of State. The Senate quickly confirmed Marshall to the post. Somewhat unusually, Marshall continued serving as Secretary of State after his judicial appointment. In a twist of fate that would have implications for the Marbury case, this role required him to process commissions (legal documents formalizing government appointments) for the recently appointed judges, including William Marbury.

On March 2, 1801, the day before the end of his presidency, Adams nominated Marbury to serve in the newly created post of justice of the peace in the District of Columbia. The Senate approved Marbury’s nomination the next day. Adams promptly signed Marbury’s commission and Marshall affixed an official seal to the document. Marshall’s brother, James, was supposed to deliver the commissions to the judges, but returned several, including Marbury’s, when he found he could not carry them all. Marbury had not received his commission when Marshall left office shortly after Adams.

At Jefferson’s behest, Marshall’s successor refused to deliver the commission (future President James Madison eventually filled the post of Secretary of State, but it appears the initial decision involved Attorney General and temporary Secretary of State Levi Lincoln). Marbury sued Madison in the Supreme Court, seeking a writ of mandamus. Petitions for writs of mandamus requested court orders commanding an official to perform his or her duty. While the petition was pending before the Court, Congress passed a law changing the timing of the Supreme Court’s term, meaning the Court did not reopen until February 1803.

When the Supreme Court finally heard the case, Madison declined to appear, apparently believing that the Court did not have the power to compel him to give Marbury his commission. After hearing Marbury’s arguments, Marshall wrote an opinion for a unanimous Court. Marshall broke the case down into three questions: 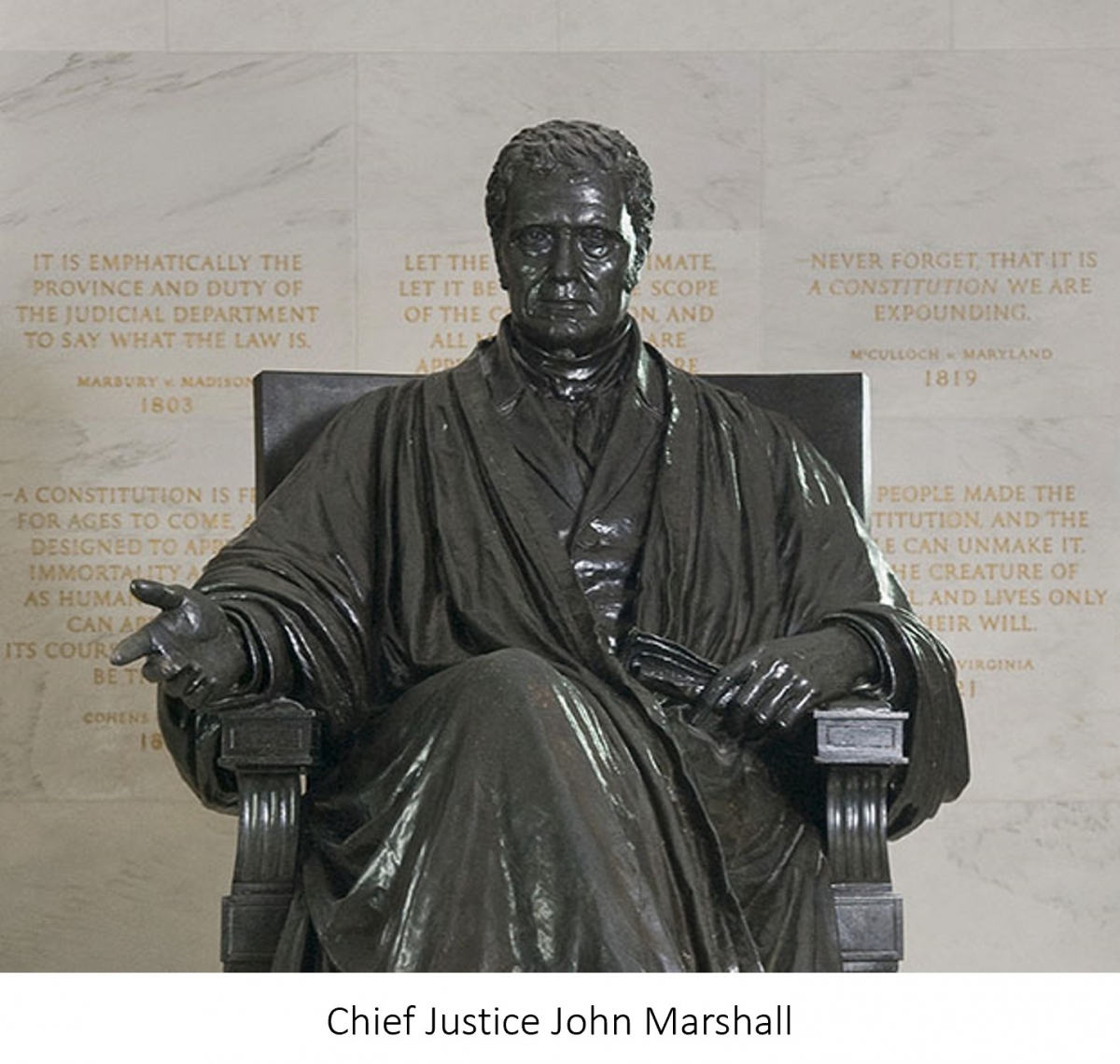 Marshall answered “yes” to the first two questions. Once the commission had been signed and sealed, Marbury had been appointed a judge and the delivery of the commission was a simple formality that Madison was duty-bound to perform. Madison’s high office did not insulate him from accountability to the law.

Marshall’s answer to the final question, however, proved more complicated. A part of the Judiciary Act of 1789, the federal law that organized the federal court system, provided that the Supreme Court had the power to issue writs of mandamus. However, Marshall held that this grant of power exceeded the Court’s jurisdiction under Article III of the Constitution. Article III listed two sets of cases that the Supreme Court may hear: appeals and original suits. Marbury’s case was clearly not an appeal from a lower court, so he had to show it was within the Court’s original jurisdiction. The Court’s original jurisdiction was limited to a narrow group of cases (suits involving ambassadors, for example). Since petitions for writs of mandamus were not among the original jurisdiction cases listed in Article III, suits like Marbury’s were not included in the Supreme Court’s original jurisdiction under Article III. Marshall reasoned that Congress could not give the Court powers that were not included in the Constitution, so the part of the Judiciary Act that gave the Court the ability to hear original suits seeking writs of mandamus was unconstitutional.

Marbury v. Madison is now widely regarded as one of the Supreme Court’s most important opinions. Many subsequent landmark federal cases have relied on the judiciary’s ability to strike down acts of Congress. The case has also had many critics, however. Thomas Jefferson criticized Marshall for engaging in unnecessary editorialization, believing the case should have begun and ended with the conclusion that the Court did not have jurisdiction. Edward Corwin, one of the leading legal scholars of the first half of the twentieth century, went further, claiming the case bore “many of the earmarks of a deliberate partisan coup.”

Moreover, while the Supreme Court did not strike down another federal statute for more than fifty years, the second case in which it did so became one of the most infamous decisions in American legal history. In Scott v. Sandford (1857), often known as the Dred Scott case, Marshall’s successor, Roger Brooke Taney, invalidated the Missouri Compromise of 1820, reasoning in part that it improperly interfered with slaveholders’ rights to transport enslaved people as their property and exceeded Congress’s power to regulate federal territories. In 1861, President Abraham Lincoln, likely thinking of Dred Scott, argued for a limited form of judicial review. Similarly, federal cases striking down economic legislation during the 1930s angered President Franklin Roosevelt and many of his supporters and led to arguments for restraints on judicial power.