How closely should federal courts review the fairness of state criminal trials on petitions for writs of habeas corpus?

Federal courts have had the authority since 1867 to issue writs of habeas corpus to state officials holding prisoners in custody. This writ requires the state to defend the legal basis for the prisoner’s detention. As a result, federal habeas corpus has long provided a means for prisoners to appear before a federal court and argue that their state trials violated federal law or the Constitution of the United States.

Before the mid-twentieth century, however, federal courts seldom used this power to free state prisoners who had been provided basic legal procedures like a trial before a judge and jury and an appeal in state court. Federal courts could not review state criminal cases simply because a prisoner alleged the court had made a factual or legal error, for example. This rule respected the state courts’ important role in the criminal justice system, but critics alleged it led to the incarceration or execution of many innocent defendants. There was also concern that some states did not give proper weight to federal rights, particularly in cases involving unpopular minority groups.

In Moore v. Dempsey (1923), the Supreme Court of the United States began a long transition toward a more searching review of state criminal proceedings, ruling that federal district courts could hold hearings to determine the validity of state convictions where the prisoner alleged his or her trial had been dominated by a mob. This ruling was regarded as particularly important for racial and religious minority groups, whose members were sometimes denied a fair trial when public sentiment called for a conviction.

The appropriate scope of federal habeas corpus review of state criminal convictions was a controversial issue during Reconstruction, the period immediately following the U.S. Civil War (1861–65). In 1867, Congress passed a statute that, for the first time, extended federal habeas corpus to state prisoners. The Republican majority in Congress argued this law was necessary to safeguard the hard-won civil rights of freed blacks in the aftermath of the war. Congress was wary of Southern state courts’ ability to determine fairly the guilt or innocence of freed slaves and other African Americans. Nonetheless, the Supreme Court generally interpreted the federal courts’ power to delve into the fairness of state proceedings narrowly. A line of cases restricted federal judges’ review to basic procedural questions like whether the state court had jurisdiction.

Trials dominated by mobs demanding rough justice complicated this review, however. Many scholars have pointed to the infamous Leo Frank case as a turning point. Frank was a Jewish businessman accused of the murder of a young woman in Georgia. By most accounts, his trial was conducted in a hostile and anti-Semitic atmosphere, with a loud mob shouting outside the courthouse. The judge went so far as to advise Frank not to appear for the verdict, lest the courtroom descend into violence. The Supreme Court upheld the denial of habeas corpus in the case, emphasizing that the Georgia Supreme Court had evaluated the fairness of the trial away from any threat of violence and had concluded that Frank received a proper trial. Justice Oliver Wendell Holmes, Jr., wrote a famous dissent that argued federal courts had to exercise a more searching review of state proceedings to determine whether the trial had been “more than an empty shell.” Although Moore did not overturn Frank, many observers have noted that the Court’s opinion in the later case built on this dissent.

Moore v. Dempsey arose from the exploitative sharecropping system in Phillips County, Arkansas. Under this system, black tenant farmers purchased farming equipment on credit, often on unfair terms, and worked to repay the debt. In practice, the system left many African Americans tied to their land and beholden to white creditors and landowners.

In the aftermath of World War I, a group of black farmers formed an organization designed to combat this system. White landowners and law enforcement officers attacked the group as it met at a church. The African American farmers retaliated, killing one of the aggressors. Although the white group subsequently burned the church down to cover the scale of the assault, it seems likely they killed several blacks.

Though the African-American farmers had not started the violence, word spread of a black insurrection in Phillips County. In the days that followed, large groups of white vigilantes from neighboring areas came to the county bent on racial violence. Estimates varied wildly as to the scale of the violence. Anywhere from 11 to 856 African Americans were murdered in a matter of days. Five white men also died.

After the violence had subsided, the Governor of Arkansas empowered a group of prominent local whites known as the “Committee of Seven” to investigate the incident. In October 1919, the committee released a report claiming the bloodbath was the result of a planned violent uprising by black sharecroppers. During the ensuing criminal investigation, members of the Committee of Seven ordered black witnesses repeatedly beaten and tortured until they gave incriminating evidence or confessed.

Several black men, including Frank Moore, the lead petitioner in the eventual Supreme Court case, were indicted for murder and several other offenses by a grand jury that included at least one member of the Committee of Seven. The trial of Moore and his codefendants lasted less than an hour and took place while a crowd outside threatened to lynch the defendants unless they were found guilty. The jury returned a guilty verdict after less than five minutes’ deliberation and the judge later sentenced Moore and his fellow defendants to death. Dozens of others awaiting trial pleaded guilty to lesser crimes to avoid similar punishment.

After unsuccessful appeals in the state courts, Moore and four of his codefendants petitioned the U.S. District Court for the Eastern District of Arkansas for a writ of habeas corpus. Their petition included statements from several witnesses regarding the violence and intimidation surrounding the investigation and trial, including two men who had participated in torture and regretted their actions. Judge Jacob Trieber granted the petition, but then recused himself from the case as he had lived in Phillips County. In granting the petition, Judge Trieber had not set the prisoners free or ruled on the merits of the case. His action merely meant that the state had to defend the legality of the prisoners’ detention. Judge John Cotteral, a district judge from Oklahoma appointed to hear the case in Judge Trieber’s place, subsequently dismissed the case on the grounds that even if Moore’s allegations of torture and intimidation were true, it was not appropriate for the federal courts to order the release of the prisoners because they had been permitted a trial and appeal in the state court system. 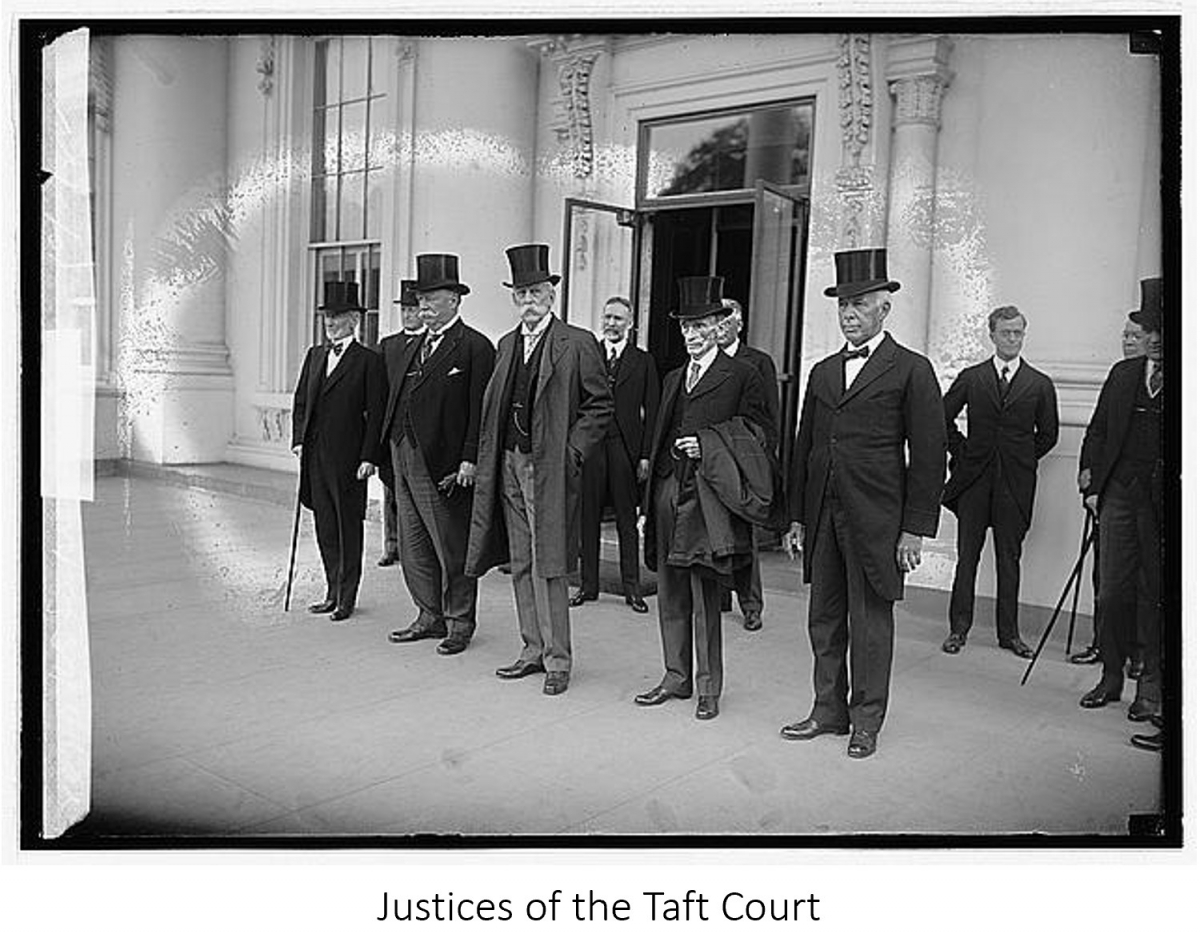 Under a law then in effect, state prisoners denied habeas relief could appeal directly to the Supreme Court. Moore and his fellow prisoners took this route, arguing that their trial had been a farce. The state, on behalf of the nominal defendant E.H. Dempsey, the Keeper of the Arkansas State Penitentiary, argued that the state court system had permitted the petitioners a fair trial and that, as in Frank, the State Supreme Court had upheld the trial’s fairness away from any mob intimidation.

Justice Holmes, this time in the majority, ruled in the petitioners’ favor. Holmes began with a detailed recitation of the allegations of violence and intimidation surrounding the trial. In language that echoed his dissent in Frank, Holmes reasoned that if “the whole proceeding is a mask [and] counsel, jury and judge were swept to the fatal end by an irresistible wave of public passion, and . . . the State Courts failed to correct the wrong,” no procedure put in place by the state could secure the prisoners’ rights. Thus, the state appeals process did not relieve a federal judge of “the duty of examining the facts for himself” when a habeas petition alleged facts that would “make the trial absolutely void.” Justice James McReynolds, joined by Justice George Sutherland, dissented from the Court’s decision. McReynolds quoted at length from the Frank opinion, arguing that the Court had needlessly abandoned the restrained approach adopted by that case. He also cast doubt on the reliability of the petition’s characterization of the investigation and trial. “I cannot agree[,]” he wrote, “that the solemn adjudications by courts of a great State . . . can be successfully impeached by the . . . affidavits made upon information and belief of ignorant convicts joined by two white men—confessedly atrocious criminals. The fact that petitioners are poor and ignorant and black naturally arouses sympathy; but that does not release us from enforcing principles which are essential to the orderly operation of our federal system.”

The Court’s ruling theoretically meant that the district court had to hold a hearing to determine whether the prisoners’ trial was indeed merely a “mask” for mob rule. Nevertheless, the court never held this hearing. In November 1923, the Governor of Arkansas commuted the prisoners’ sentences from death to twelve years. The prisoners’ attorneys apparently agreed to this commutation (which rendered their clients eligible for parole since they had served a third of their sentence) rather than risk losing the federal hearing. Though they were not immediately paroled, the Governor granted the prisoners indefinite furloughs, effectively releasing them from custody, in January 1925.

The Supreme Court gradually adopted a broader understanding of federal habeas review of state criminal trials in the decades that followed. In Brown v. Allen (1953), the Court held that state prisoners alleging a violation of their rights in state court were entitled to a review by a federal court provided they met certain procedural criteria. The Court further extended the availability of such hearings in a series of cases in the 1960s, though more recent holdings and federal statutes have imposed some additional restrictions on state prisoners’ ability to challenge the constitutionality of their trials.